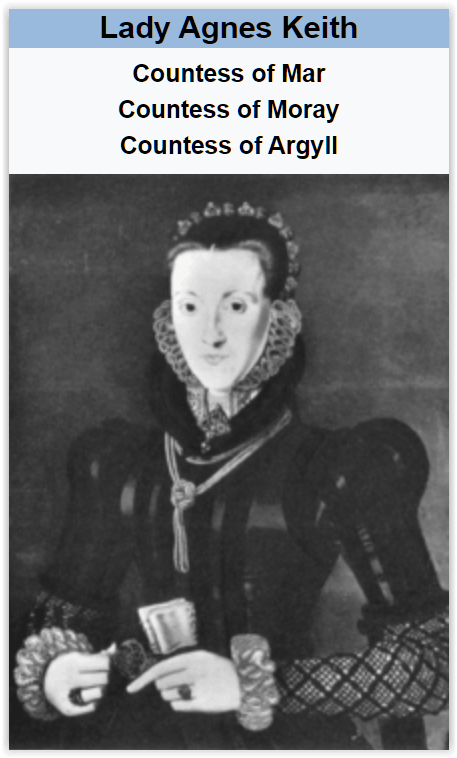 When she was 31 years old, on February 8, 1562, Lady Agnes was married to James Stewart, the illegitimate half-brother and chief adviser of Mary, Queen of Scots, who had been created Earl of Mar the previous day. They had three children.
1. Elizabeth Stewart, 2nd Countess of Moray (1565 – 1591).
2. Lady Annabell Stewart (1568 –1570), born at Stirling Castle.
3. Lady Margaret Stewart, (b. 1570, after her father's death – d. 1586).
James Hamilton, of the powerful Hamilton clan, a supporter of Queen Mary, assassinated the Earl of Moray at Linlithgow in January 1570..

The decade between 1573 and 1584 saw the Earl & Countess of Argyll embroiled in a bitter dispute with the new Regent, James Douglas, Earl of Morton. As the wife of Scotland's Regent after Queen Mary was deposed in 1567, Lady Agnes Stewart had been granted guardianship of most of the Queen's Crown Jewels, held in trust for her son, the future King James VI, who was just an infant. After her husband, the Earl of Moray, was assassinated in 1570, she had kept the gems, still held in trust, but, as she argued, also as a guarantee for eventual compensation for her family's sacrifice. The new regent, Lord Morton, wanted the jewels back and even Queen Mary asked for their return. Eventually, in 1575, Sir Colin and his wife were forced to give most of them up (some had been sold by Agnes' first husband, Regent James Stewart, to finance military operations before 1570). This caused a deep rift between Campbell and Moray and their clan allies and the Regent. Eventually, in 1579, the Earl of Morton was forced out and Sir Colin Campbell was named Scotland's Chancellor, a post he held until his death in 1584. James Douglas, the former Regent, was later convicted of treason and beheaded in Edinburgh in 1581.

Lady Agnes, Countess of Argyll, survived her husband by four years. She died in July 1588 at her home in Edinburgh, Scotland, and was buried in St. Giles Cathedral, inside the tomb of her first husband, James Stewart, Earl of Moray. The tomb is located in St. Anthony's aisle and was carved by John Roytell and Murdoch Walker. Lady Agnes' will was proven on August 9, 1591.