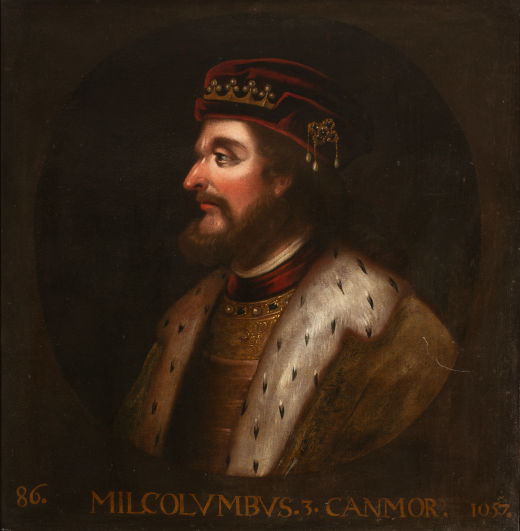 Malcolm III (Scottish Gaelic: Máel Coluim mac Donnchada; c. 26 March 1031 – 13 November 1093 (age 62)) was King of Scots from 1058 to 1093. He was later nicknamed "Canmore" ("ceann mòr", Gaelic for "Great Chief": "ceann" denotes "leader", "head" (of state) and "mòr" denotes "pre-eminent", "great", and "big") Malcolm's long reign of 35 years preceded the beginning of the Scoto-Norman age. Henry I of England and Eustace III of Boulogne were his sons-in-law, making him the maternal grandfather of Empress Matilda, William Adelin and Matilda of Boulogne. All three of them were prominent in English politics during the 12th century.
Malcolm's kingdom did not extend over the full territory of modern Scotland: the north and west of Scotland remained under Scandinavian rule following the Norse invasions. Malcolm III fought a series of wars against the Kingdom of England, which may have had as its objective the conquest of the English earldom of Northumbria. These wars did not result in any significant advances southward. Malcolm's primary achievement was to continue a lineage that ruled Scotland for many years, although his role as founder of a dynasty has more to do with the propaganda of his youngest son David I and his descendants than with history.
Malcolm's second wife, St. Margaret of Scotland, is Scotland's only royal saint. Malcolm himself had no reputation for piety; with the notable exception of Dunfermline Abbey in Fife, he is not definitely associated with major religious establishments or ecclesiastical reforms.
Photo:Jacob de Wet II, Public domain, via Wikimedia Commons

Malcolm's father Duncan I became king in late 1034, on the death of Malcolm II, Duncan's maternal grandfather and Malcolm's great-grandfather. According to John of Fordun, whose account is the original source of part of William Shakespeare's Macbeth, Malcolm's mother was a niece of Siward, Earl of Northumbria, but an earlier king-list gives her the Gaelic name Suthen.Other sources claim that either a daughter or niece would have been too young to fit the timeline, thus the likely relative would have been Siward's own sister Sybil, which may have translated into Gaelic as Suthen.
The Orkneyinga saga reports that Malcolm married the widow of Thorfinn Sigurdsson, Ingibiorg, a daughter of Finn Arnesson. Although Ingibiorg is generally assumed to have died shortly before 1070, it is possible that she died much earlier, around 1058.
Malcolm's marriage to Ingibiorg secured him peace in the north and west. The Heimskringla tells that her father Finn had been an adviser to Harald Hardraade and, after falling out with Harald, was then made an Earl by Sweyn Estridsson, King of Denmark, which may have been another recommendation for the match. Malcolm enjoyed a peaceful relationship with the Earldom of Orkney, ruled jointly by his stepsons, Paul and Erlend Thorfinnsson. The Orkneyinga Saga reports strife with Norway but this is probably misplaced as it associates this with Magnus Barefoot, who became king of Norway only in 1093, the year of Malcolm's death.
Although he had given sanctuary to Tostig Godwinson when the Northumbrians drove him out, Malcolm was not directly involved in the ill-fated invasion of England by Harald Hardraade and Tostig in 1066, which ended in defeat and death at the battle of Stamford Bridge. In 1068, he granted asylum to a group of English exiles fleeing from William of Normandy, among them Agatha, widow of Edward the Confessor's nephew Edward the Exile, and her children: Edgar Ætheling and his sisters Margaret and Cristina.
By the end of 1070, Malcolm had married Edgar's sister Margaret (later known as Saint Margaret).
While marching north again, Malcolm was ambushed by Robert de Mowbray, Earl of Northumbria, whose lands he had devastated, near Alnwick on 13 November 1093. There he was killed by Arkil Morel, steward of Bamburgh Castle. The conflict became known as the Battle of Alnwick. Edward was mortally wounded in the same fight. Margaret, it is said, died soon after receiving the news of their deaths from Edgar.
Malcolm's body was taken to Tynemouth Priory for burial. The king's body was sent north for reburial, in the reign of his son Alexander, at Dunfermline Abbey, or possibly Iona.
Malcolm and Ingibiorg had three sons:
1. Duncan II of Scotland, succeeded his father as King of Scotland
2. Donald, died ca. 1094
3. Malcolm, died ca. 1085 (apocryphal)
Malcolm and Margaret had eight children, six sons and two daughters:
1. Edward, killed 1093
2. Edmund of Scotland
3. Ethelred, abbot of Dunkeld
4. King Edgar of Scotland
5. King Alexander I of Scotland
6. Edith of Scotland, also called Matilda, married King Henry I of England
7. Mary of Scotland, married Eustace III of Boulogne
8. King David I of Scotland
Wikipedia, the free encyclopedia