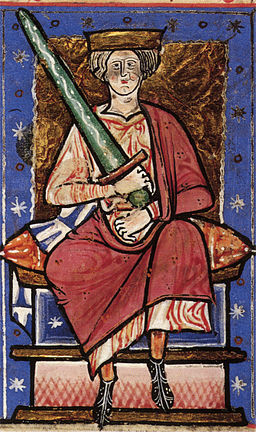 Æthelred II (Old English: Æþelræd, pronounced [ˈæðelræːd]; (c. 966 – 23 April 1016), known as the Unready, was King of the English from 978 to 1013 and again from 1014 until his death in 1016. His epithet does not derive from the modern word "unready", but rather from the Old English unræd meaning "poorly advised"; it is a pun on his name, which means "well advised".
Æthelred was the son of King Edgar the Peaceful and Queen Ælfthryth. He came to the throne at about the age of 12, following the assassination of his older half-brother, King Edward the Martyr. Æthelred's mother may have ordered the murder of his half-brother in order to place Æthelred on the throne.
The chief problem of Æthelred's reign was conflict with the Danes. After several decades of relative peace, Danish raids on English territory began again in earnest in the 980s, becoming markedly more serious in the early 990s.
Æthelred's father, King Edgar, had died suddenly in July 975, leaving two young sons behind. The elder, Edward (later Edward the Martyr), was probably illegitimate, and was "still a youth on the verge of manhood" in 975. The younger son was Æthelred, whose mother, Ælfthryth, Edgar had married in 964.
Photo:  Public domain, via Wikimedia Commons

Both boys, Æthelred certainly, were too young to have played any significant part in the political manoeuvring which followed Edgar's death. It was the brothers' supporters, and not the brothers themselves, who were responsible for the turmoil which accompanied the choice of a successor to the throne. Æthelred's cause was led by his mother and included Ælfhere, Ealdorman of Mercia and Bishop Æthelwold of Winchester, while Edward's claim was supported by Dunstan, the Archbishop of Canterbury and Oswald, the Archbishop of York among other noblemen, notably Æthelwine, Ealdorman of East Anglia, and Byrhtnoth, ealdorman of Essex. In the end, Edward's supporters proved the more powerful and persuasive, and he was crowned king at Kingston upon Thames before the year was out. Edward reigned for only three years before he was murdered by members of his brother's household.
Æthelred was between nine and twelve years old when he became king and affairs were initially managed by leading councillors such as Æthelwold, bishop of Winchester, Queen Ælfthryth and Dunstan, archbishop of Canterbury. Æthelwold was especially influential and when he died, on 1 August 984, Æthelred abandoned his early councillors and launched on policies which involved encroachment on church privileges, to his later regret.
Danish attacks started becoming more serious in the early 990s, with highly devastating assaults in 1006–1007 and 1009–1012. Tribute payments by Æthelred did not successfully temper the Danish attacks. Æthelred's forces were primarily composed of infantry, with substantial numbers of foreign mercenaries. He did not have substantial numbers of trained cavalry forces.
During this period, the Normans offered shelter to Danes returning from raids on England. This led to tension between the English and Norman courts, and word of their enmity eventually reached Pope John XV. The pope was disposed to dissolve their hostility towards each other, and took steps to engineer a peace between England and Normandy, which was ratified in Rouen in 991.
Between 980 and 1013, Æthelred and England were under  constant seige from the Danes, and numererous battles were fought.
The Battle of Maldon, in August 991, a sizeable Danish fleet began a sustained campaign in the south-east of England. This was the first of a series of crushing defeats felt by the English: beaten first by Danish raiders, and later by organised Danish armies.
In the aftermath of Maldon, it was decided that the English should grant the tribute to the Danes that they desired, and so a gafol of £10,000 was paid them for their peace. Yet it was presumably the Danish fleet that had beaten Byrhtnoth at Maldon that continued to ravage the English coast from 991 to 993.
In 1001, a Danish fleet ravaged west Sussex. During its movements, the fleet regularly returned to its base in the Isle of Wight. There was later an attempted attack in the south of Devon, though the English mounted a successful defence at Exeter. Nevertheless, Æthelred must have felt at a loss, and, in the Spring of 1002, the English bought a truce for £24,000.
On 13 November 1002 Æthelred ordered the massacre of all Danish men in England, St Brice's Day. The Danish army left England for Denmark in 1005, but returned in 1006 only to be bought off in early 1007 by tribute money of £36,000, and for the next two years England was free from attack.
Then again in 1009, a most formidable force led by Thorkell the Tall and his brother Hemming invaded England. It harried England until it was bought off by £48,000 in April 1012.
Sweyn then launched an invasion in 1013 intending to crown himself king of England, during which he proved himself to be a general greater than any other Viking leader of his generation. By the end of 1013 English resistance had collapsed and Sweyn had conquered the country, forcing Æthelred into exile in Normandy.  But the situation changed suddenly when Sweyn died on 3 February 1014. The crews of the Danish ships in the Trent that had supported Sweyn immediately swore their allegiance to Sweyn's son Cnut the Great.
Over the years, England was in a complex and volatile situation, Æthelred was joined by his son Edmund Ironside in 1016 in a bid to defend London against Cnut, who at this time  had conquered most of England.
Æthelred died on 23 April 1016 and was buried in Old St Paul's Cathedral, London, subsequently destroyed in the Great Fire of London in 1666.
Æthelred married first Ælfgifu, daughter of Thored, earl of Northumbria, in about 985. Their known children are:

In 1002 Æthelred married Emma of Normandy, sister of Richard II, Duke of Normandy. Their children were:

From Wikipedia, the free encyclopedia