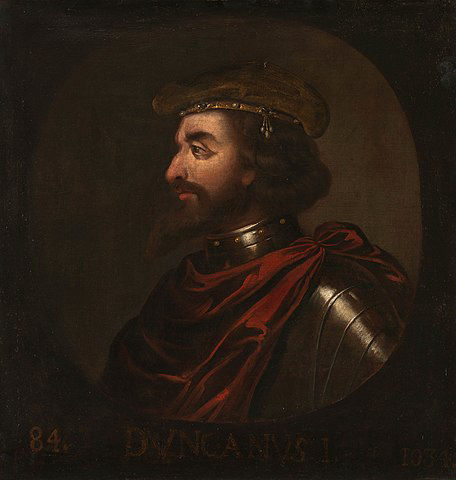 He was a son of Crínán, hereditary lay abbot of Dunkeld, and Bethóc, daughter of king Máel Coluim mac Cináeda (Malcolm II).
Unlike the "King Duncan" of Shakespeare's Macbeth, the historical Duncan appears to have been a young man. He followed his grandfather Malcolm as king after the latter's death on 25 November 1034, without apparent opposition. He may have been Malcolm's acknowledged successor or Tànaiste as the succession appears to have been uneventful. Earlier histories, following John of Fordun, supposed that Duncan had been king of Strathclyde in his grandfather's lifetime, between 1018 and 1034, ruling the former Kingdom of Strathclyde as an appanage. Modern historians discount this idea, although it is supported by the ODNB.
An earlier source, a variant of the Chronicle of the Kings of Alba (CK-I), gives Duncan's wife the Gaelic name Suthen, and John of Fordun suggests that she may have been a relative of Siward, Earl of Northumbria. Whatever his wife's name and family connections may have been, Duncan had at least two sons. The eldest, Malcolm III (Máel Coluim mac Donnchada) was king from 1058 to 1093 after assassinating and usurping Lulach, Macbeth's stepson. The second son Donald III (Domnall Bán, or "Donalbane") was king afterwards. Máel Muire, Earl of Atholl is a possible third son of Duncan, although this is uncertain.
Photo:Jacob de Wet II, Public domain, via Wikimedia Commons

The early period of Duncan's reign was apparently uneventful, perhaps a consequence of his youth. Macbeth (Mac Bethad mac Findláich) is recorded as having been his dux, today rendered as "duke" and meaning nothing more than the rank between prince and marquess, but then still having the Roman meaning of "war leader". In context — "dukes of Francia" had half a century before replaced the Carolingian kings of the Franks and in England the over-mighty Godwin of Wessex was called a dux — this suggests that Macbeth may have been the power behind the throne.
In 1039, Duncan led a large Scots army south to besiege Durham, but the expedition ended in disaster. Duncan survived, but the following year he led an army north into Moray, Macbeth's domain, apparently on a punitive expedition against Moray. There he was killed in action, at Bothnagowan, now Pitgaveny, near Elgin, by the men of Moray led by Macbeth, probably on 14 August 1040. He is thought to have been buried at Elgin before later relocation to the island of Iona.
Duncan was married to a Princess of Northumberland who bore him four sons. Malcolm III (Malcolm Canmore)(Mael Coluim mac Donnchada) and Donald III. (Domnall Bán) later also became kings of Scotland. A possible third son (uncertain) was Máel Muire, Earl of Atholl, whose grandson Harald Maddadson was to rule Orkney.
Wikipedia, the free encyclopedia