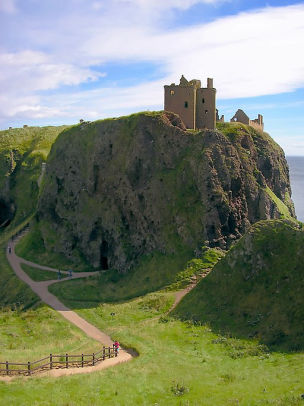 William Keith, 4th Earl Marischal was a Scottish nobleman and politician, he was the son of Robert Keith, Master of Marischal and Lady Elizabeth Douglas, daughter of John Douglas, 2nd Earl of Morton. He succeeded his grandfather, William Keith, 3rd Earl Marischal. He was one of the earls who accompanied James V to France for his marriage to Madeleine of Valois, daughter of King Francis I of France. The wedding took place on 1 January 1537 at Notre Dame Cathedral in Paris and was followed by days of Jousting at the Louvre.
He fought at the Battle of Pinkie in 1547, in which the Scots were defeated by the English forces led by Edward Seymour, 1st Duke of Somerset in a bloody battle that was part of the War of the Rough Wooing. Keith was said to have been in favour of the proposed marriage between the infant Mary, Queen of Scots, and Prince Edward of England, son of King Henry VIII. He held the Office of Extraordinary Lord of Session in 1541, 1561, and lastly in 1573. In 1561, he was a member of Queen Mary's Privy Council, and while refraining from extreme partisanship, he was an adherent of the Reformation. Later, the Earl Marischal retired with his great fortune to a secluded life at Dunnottar Castle becoming known locally as "William of the Tower."

Photo: No machine-readable author provided. Macieklew assumed (based on copyright claims)., CC BY-SA 2.5, via Wikimedia Commons. Dunnottar Castle, for many years, the home of the Keith family and Earl Marischal.

When he died on 7 October 1581 at the age of 75, he was succeeded by his grandson, George Keith, son of William, Master of Marischal; George became the 5th Earl Marischal.