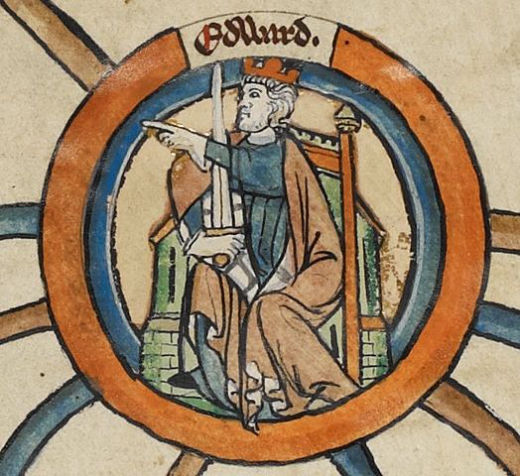 Edward the Elder was King of the Anglo-Saxons from 899 until his death. He was the elder son of Alfred the Great and his wife Ealhswith. When Edward succeeded to the throne, he had to defeat a challenge from his cousin Æthelwold, who had a strong claim to the throne as the son of Alfred's elder brother and predecessor, Æthelred.
Alfred had succeeded Æthelred as king of Wessex in 871, and almost faced defeat against the Danish Vikings until his decisive victory at the Battle of Edington in 878. After the battle, the Vikings still ruled Northumbria, East Anglia and eastern Mercia, leaving only Wessex and western Mercia under Anglo-Saxon control. In the early 880s Æthelred, Lord of the Mercians, the ruler of western Mercia, accepted Alfred's lordship and married his daughter Æthelflæd, and around 886 Alfred adopted the new title King of the Anglo-Saxons as the ruler of all Anglo-Saxons not subject to Danish rule.
Edward's parents, Alfred and Ealhswith, married in 868. Ealhswith's father was Æthelred Mucel, Ealdorman of the Gaini, and her mother, Eadburh, was a member of the Mercian royal family. Alfred and Ealhswith had five children who survived childhood. The oldest was Æthelflæd, who married Æthelred, Lord of the Mercians, and ruled as Lady of the Mercians after his death. Edward was next, and the second daughter, Æthelgifu, became abbess of Shaftesbury. The third daughter, Ælfthryth, married Baldwin, Count of Flanders, and then there was the younger son, Æthelweard,
Photo: Unknown authorUnknown author, Public domain, via Wikimedia Commons

Edward ruled from time of his father's death on 26 October, 899. But he wasn't coronated until  June of 900. His reign began with his cousin Athelwold, son of King Athelred, seizing the royal manors of Wimborne and Christchurch. When Edward confronted him Athelwold fled. Athelwold was accepted by the Danes of Northumbria. There he was elected King of York. In 901 Athelwold was in Essex with a fleet he raised over seas. In 902 he convinced a Danish army in East Anglia to raid into Wessex and Mercia with him. In response Edward led his army into East Anglia and destroyed the countryside. Edward ordered his troops to retire back to Wessex, but the Kentish men disobeyed his orders and stayed behind.
The Danish army quickly caught up with them. In the battle that followed, Ethelwald was killed.
Edward continued his wars against the Danes. He received a great deal of aid from his sister, Ethelflaeda. She had married Ethelred of Mercia and at his death she became the leader of the Mercians. Together Edward and Ethelflaeda defeated the Danes in numerous battles. But Ethelflaeda also built a line of fortresses on the Mercian Frontier. This was what her father Alfred the Great had done on the Wessex borders with the Danish held territories. Edward began to use these fortresses differently. Not just for defense of his own lands he used them to hold captured lands. Edward and his sister were very successful against the Danes. So much so they quit raiding into Wessex and Mercia. Freed of wars with the Danes, Edward could attend to other issues. He brought Strathclyde and parts of Northumbria under his control. He also brought Mercia under his direct rule after his sister Ethelflaeda died. The appearance of the Viking leader Ragnvald in York slowed his progress. But by the end of his reign he had control of all lands south of the River Humber. In a treaty Ragnvald, the kings of Strathclyde and the Scots recognized his rule.
In 924 Mercian nobles wanting to be free of Edward's rule made an alliance with the Welsh. Edward quickly put down the rebellion and placed a garrison in the town of Chester. But this expedition proved to be his last. Edward died 17 July 924. Before the end of the year his son Athelstan was recognized as the rightful king.
Edward had about fourteen children from three marriages.
He first married Ecgwynn around 893. Their children were:
1. Æthelstan, King of England 924–939
2. A daughter, perhaps called Edith, married Sihtric, Viking King of York in 926, who died in 927. Possibly Saint Edith of Polesworth
In c. 900, Edward married Ælfflæd, daughter of Ealdorman Æthelhelm, probably of Wiltshire. Their children were:
3. Ælfweard, died August 924, a month after his father; possibly King of Wessex for that month
4. Edwin, drowned at sea 933
5. Æthelhild, lay sister at Wilton Abbey
6. Eadgifu (died in or after 951), married Charles the Simple, King of the West Franks, c. 918
7. Eadflæd, nun at Wilton Abbey
8. Eadhild, married Hugh the Great, Duke of the Franks in 926
9. Eadgyth (died 946), in 929/30 married Otto I, future King of the East Franks, and (after Eadgyth's death) Holy Roman Emperor
10. Ælfgifu, married "a prince near the Alps", perhaps Louis, brother of King Rudolph II of Burgundy
Edward married for a third time, about 919, Eadgifu, the daughter of Sigehelm, Ealdorman of Kent. Their children were:
11. Edmund I, King of England 939–946
12. Eadred, King of England 946–955
13. Eadburh (died c. 952), Benedictine nun at Nunnaminster, Winchester, and saint
14. Eadgifu, existence uncertain, possibly the same person as Ælfgifu
Wikipedia, the free encyclopedia