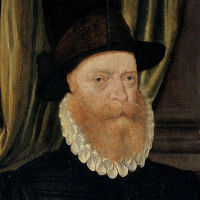 James Stuart was the son of James Stuart, 3rd Earl of Moray and Lady Anne Gordon.
He was born in Dyke in the Earldom of Moray, Aberdeenshire, Scotland
He was titeld Lord Doune before he succeeded to the Peerage. He was served heir
to his father 15 November 1638. He had a charter, 12 November 1641, of the Castle of Spynie, and was made Sheriff- Principal of Inverness 27 July 1647. He was a royalist, but did not take much part in the troubles of his time, though he was colonel of a regiment of horse and foot in Elgin and Nairn in 1643, and in the following year commanded the foot which were raised in the northern counties of Scotland." He either did not wish to connect himself too far with the fortunes of his party or possibly was of weak constitution, as he was excused from attending a rendezvous in 1645.
He married Lady Margaret Home, daughter of Alexander Home, 1st Earl of Home and Mary Dudley, on 18 October 1627 (contract). Margaret, sister and ultimately co-heiress of James, Lord Home.

They had, along with her sister Anne and her husband, John, Lord Maitland, a charter, 20 February 1643, of certain Home lands in security of certain sums of money owing them by the late Earl, probably as the marriage portion of his sister. Margaret also acquired from her sister by disposition, dated 21 May 1645, to herself and her son James, Lord Doune, the house and grounds in the Canongate of Edinburgh which had been built, or rather re-built, by the Countess of Home, and which is now known as Moray House. On 26 August 1653 the Countess of Moray resigned the subjects in favour of her eldest surviving son, who had succeeded to the Earldom.
James died 04.March, and was buried 22, March 1653, when it is said he had sold a large part of his estates.?
The couple had ten children: