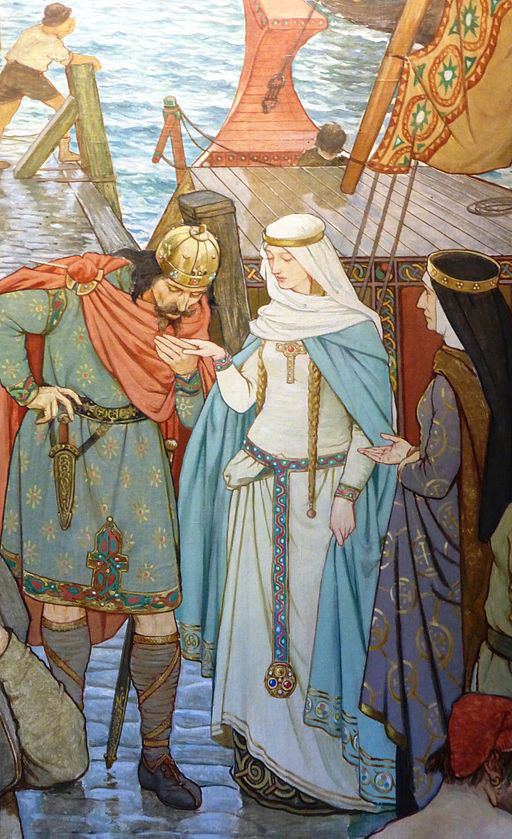 ST. MARGARET of Scotland was born about 1045 in Hungary and was the daughter of EDWARD THE OUTLAW and Agatha, a kinswoman of the wife of St. Stephen of Hungary. Margaret was traditionally descended from the Caesars through her mother.
Her brother was EDGAR THE ATHELING who was the rightful heir to the English crown, Harold Godwin being a usurper. Edgar and his sisters fled to Scotland about 1068. Edgar died many years after, having attained nearly to the age of 100. The WARDLAW of that day was one of the Anglo-Saxon nobles who accompanied Edgar and Margaret to Scotland. Margaret married MALCOLM CANMORE the Scottish King about 1070. Turgot (her confessor) wrote an extant biography of the Queen. Her book of the Gospels is preserved in the Bodleian Library at Oxford.
She was a great civilizing influence in the barbarian Šcotland of her day. A devoted Christian, a model wife, protectress of the poor, the builder of the Abbey of Dunfermline, she was the Apostle of Scotland, and attached the Church of Scotland permanently to the customs of Western Christendom.
St. Margaret died on Nov:16:1093. She was canonized by Innocent IV in 1250. She was buried in Dunfermline Abbey. After the Reformation her head passed into the possession of Mary, Queen of Scots, and later to the Jesuits of Douai. It is supposed to have perished in the French Revolution. The rest of the relics went to Spain, and were kept in the Escorial. Some appear to have been sent to Rome. Mr. Plowden-Wardlaw possesses a relic of her bone given him by Pius X through Father Pollen, S.J., on Feb : 28: 1908.