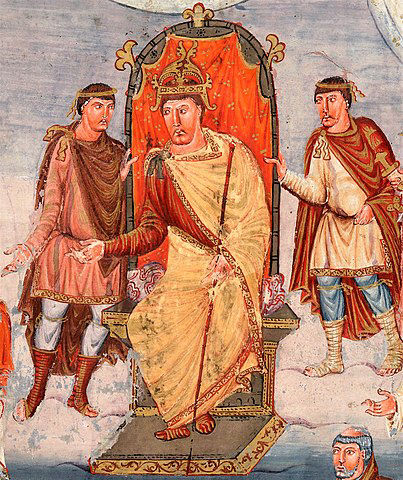 Charles the Bald (13 June 823 – 6 October 877) was a 9th-century king of West Francia (843–877), king of Italy (875–877) and emperor of the Carolingian Empire (875–877). After a series of civil wars during the reign of his father, Louis the Pious, Charles succeeded, by the Treaty of Verdun (843), in acquiring the western third of the Carolingian Empire. He was a grandson of Charlemagne and the youngest son of Louis the Pious by his second wife, Judith.
At birth, when his elder brothers were already adults and had been assigned their own regna, or subkingdoms, by their father. The attempts made by Louis the Pious to assign Charles a subkingdom, first Alemannia and then the country between the Meuse and the Pyrenees (in 832, after the rising of Pepin I of Aquitaine) were unsuccessful. The numerous reconciliations with the rebellious Lothair and Pepin, as well as their brother Louis the German, King of Bavaria, made Charles's share in Aquitaine and Italy only temporary, but his father did not give up and made Charles the heir of the entire land which was once Gaul. At a diet in Aachen in 837, Louis the Pious bade the nobles do homage to Charles as his heir. Pepin of Aquitaine died in 838, whereupon Charles at last received that kingdom, which angered Pepin's heirs and the Aquitainian nobles.
The death of the emperor Louis in 840 led to the outbreak of war between his sons.
Photo:Comte Vivien - Moines de l'abbaye Saint-Martin de Tours, vers 850, Public domain, via Wikimedia Commons

The first years of Charles's reign, up to the death of Lothair I in 855, were comparatively peaceful. During these years the three brothers continued the system of "confraternal government", meeting repeatedly with one another, at Koblenz (848), at Meerssen (851), and at Attigny (854). On the death of his nephew Lothair II in 869, Charles tried to seize Lothair's dominions by having himself consecrated as King of Lotharingia at Metz, but he was compelled to open negotiations when Louis found support among Lothair's former vassals. Lotharingia was partitioned between Charles and Louis in the resulting treaty (870).
In 875, after the death of the Emperor Louis II (son of his half-brother Lothair), Charles the Bald, supported by Pope John VIII, traveled to Italy, receiving the royal crown at Pavia and the imperial insignia in Rome on 25 December. As emperor, Charles combined the mottoes that had been used by his grandfather and father into a single formula: renovatio imperii Romani et Francorum, "renewal of the empire of the Romans and Franks". These words appeared on his seal.
According to the Annals of St-Bertin, Charles was hastily buried at the abbey of Nantua, Burgundy because the bearers were unable to withstand the stench of his decaying body. A few years later, his remains were transferred to the Abbey of Saint-Denis where he had long wished to be buried, in a porphyry tub which may be the same one known as "Dagobert's tub" (cuve de Dagobert), now in the Louvre. It was recorded that there was a memorial brass there that was melted down at the Revolution.
Charles was succeeded by his son, Louis. Charles was a prince of education and letters, a friend of the church, and conscious of the support he could find in the episcopate against his unruly nobles, for he chose his councillors from among the higher clergy, as in the case of Guenelon of Sens, who betrayed him, and of Hincmar of Reims.

Charles married Ermentrude, daughter of Odo I, Count of Orléans, in 842. She died in 869. In 870, They had a daughter, Judith born around 844. Charles married Richilde of Provence, who was descended from a noble family of Lorraine.
From Wikipedia, the free encyclopedia